So, after 15 years as a happy agnostic – and I would say that I accepted that there might be a higher being, but it was not a personal God – I was decided to start searching for God again. I can’t identify (at least not at the moment) any trigger. I thought there wasn’t any particular event or tragedy in my life. Just at some stage (maybe 2008) I decided I wanted to find God again. But the decision was a decision of finding God for myself – not the God of my childhood or upbringing, but rather what did I believe and why did I believe it?

Then I remembered… I was reading a lot of self-help and leadership improvement books (at the same time as I was studying my Masters in Business Law). At some stage, I got caught up in “searching for Wisdom”, in particular about controlling my tongue. And if there is one thing that I haven’t forgotten from my childhood, it is the sound of Dad’s voice as he read Proverbs. Dad read Proverbs to us every night: I read Proverbs today, and I hear Dad’s voice. Apparently, reading through my 2009 journal, I was really looking for answers about the power of words over your life. Here’s an excerpt (September 30, 2009):

Yesterday, I had a weird experience.  I say weird, because it was definitely out of the ordinary!  Having read the 10 curses that block the blessing, I was speaking with Alexandra and she made a comment “I’m such a B***h” and I corrected her saying “don’t curse yourself”.  Just came out of my mouth, without thinking.  Another friend, that heard me, turned and said “oh, not another one that’s converted to Kabbalah”.
And I admit, I was a little lost.  I’ve heard the word “Kabbalah” before.  I know it refers to a religion.  “Sounds” Jewish to me, but I really didn’t have any idea what I had supposedly “converted” to.  Luckily for me, Alexandra “knows all about it”.  She knows a number of people that have “converted” to Kabbalah.  And gave me a basic explanation… and there wasn’t anything in her explanation that I disagreed with.
What most impacted me about her description of Kabbalah is that it is a way of life, not a religion.  Hmmm…  What does that tell you about how people see Christianity and the Church?  When they differentiate Kabbalah from religion, and indicate that it’s a way of life?  It’s that what Christianity was supposed to be?  A new way of living?  So, how did it move from being the radical, new way of life to becoming just a religion?  Food for thought.
Anyway, my intention was not to discuss Kabbalah and whether or not Christianity is a religion or a way of life… My intention WAS to discuss that one of the points that I totally agree with them on is that the Tongue has the power of life and death.  What you say (whether you intended to say it or not, whether you were thinking when you said it or not) has an effect in this world.  What you say can bring things into existence.  Life a self-fulfilling prophecy.  When I say “I can’t do this”, am I expressing reality? or my attitude? or am I creating a reality that will result in my not being able to do it?
Cogito, ergo sum (I think, therefore I am) is a well-known statement by Descartes from 1637.  Of course, he originally wrote it in French, not in Latin.  Obviously, what we think is what we speak.
mini book review “10 curses that block the blessing”… Chapter 1:  “The Creative Power of the Tongue”.  It starts with these simple words The number one way a cruse can come on your life and block your blessings is in the words you speak to yourself and others.  Many times we curse ourselves by the words we speak.  Like the author, I don’t much believe in those Christians that go around with the “Name it and claim it” religion.  But I have been reading a lot of Proverbs this year (One chapter a day, every day, since last December, to be precise), and it clearly states “Death and life are in the power of the tongue, and those who love it will eat its fruit”. (Proverbs 18:21).
… But I certainly didn’t remember the Old Testament story of the Children of Israel getting to the river Jordan, ready to cross into the “Promised Land”, and when they send out the spies, 10 of the 12 come back and say There are giants, they have really good fortifications, they have organised armies, there is no way we can beat them (well, I do remember that part), and God’s response to Moses was “As I live, just as you have spoken in my hearing, so I will do to you”.  Uhhh… what did you say?  As I’ve spoken, so will you do?  So, whatever comes out of my mouth, that’s what will be?
Proverbs does say it in a LOT of different ways:  (Proverbs 13: 2-3)  A man shall eat well by the fruit of his mouth, but the sould of the unfaithful fees on violence.  He who guards his mouth preserves his life, but he who opens wide his lips shall have destruction.
So, what have I been creating in my life? How have I limited myself and my ability through words spoken without thought?  Throughout the book, the author mentions Hosea 4:6 “My people are destroyed for lack of knowledge…”.  I’m starting to wonder what I have destroyed in my life, through not thinking that what I say may have a full effect on my life.  Negative words produce negative results, but positive words produce positive results.
Chapter 2: “Loshon Hora – The Curse of Evil Speaking”  Once again, be careful what you say.  But, with a slightly different slant.  Karma (if that’s what you’d like to call it) – the curse of gossip and slander.  When you speak evil of another person, it will come back to haunt you.  You do reap what you sow.  You speak badly about someone else, and it comes back on you.  I’d never really given much thought or consideration to how many times the Bible speaks about gossip, but it’s up there with murder, deceit, inventors of evil things, etc.   I’ve always tended to quickly read over the “whisperers, backbiters, proud, boasters, gossiping and slanderers”…

Somehow I picked that up in the bookstore… And I just found out (reading my journal) that since December 2008 I had been reading Proverbs every day – one Chapter a day. And it all came about because I was looking and reading about the power of our words and getting Wisdom. Now, admittedly I was reading a lot of Covey, Maxwell and other writers who I know come from church backgrounds – and their values and perspectives resonated with me.

But at the end of the day, I also know I came back to what Mum & Dad taught me as a child in my search for wisdom and growth. I may have chosen a different path, but the wisdom and love was still there under it all. Teach a child in the way that they should go and they won’t stray from it.  I’m not sure if that’s quite what it says, but this morning I don’t feel like looking it up to check it. It’s somewhere in Proverbs and it says something along those lines!

And it was a conscious decision after about a year of reading Proverbs every day, to start looking for God again in my life. Not to go to someone for them to tell me what to believe, but for me to discover what I believed for myself. To study. To search. And to spend time in silence.

And reading more through my journal, in September 2009 I joined a prayer group:

I also started going to a home-group, which was basically because I’ve started to understand the power of prayer and what I wanted was a small intimate group where you get real support from “real” people.  People that are, like me, struggling with living uprightly on a day-to-day basis.  I don’t really want to go to church, because I am still struggling with the values and hypocrisy you find in Churches.  And I have no excuse, the home group is literally “around the corner” from my house.

Interesting to look back through my growth and attitudes.  Okay, I admit – I’m still not big on organised religion! I’ll leave you with what I found yesterday in Facebook: 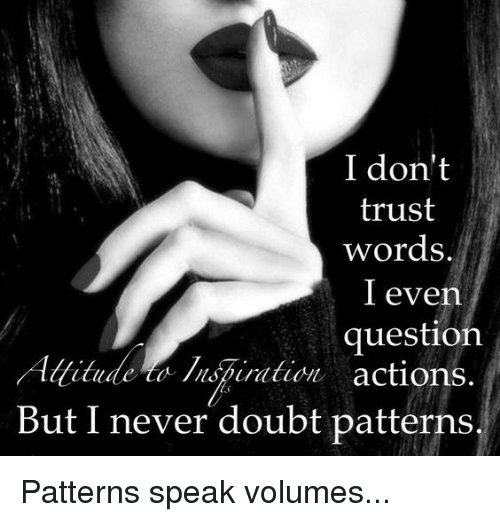 So what are the patterns of my thoughts & words? Those are the ones creating my life!

Leave a Reply to you know who! Cancel reply