As I see here in Panama wave after wave of Venezuelans arriving, running from the disaster in their country, I realise that it is hard for us to welcome them with open arms.  People here feel threatened by the mass migration wave that has hit Panama – “there are too many of them”. Crimes rates have increased over the past three years. Housing has become more expensive. Unemployment has increased.  The cost of living has gone up.

And “the Venezuelans are to blame”…

Even if that is true, as Christians we are called to respond with love for our neighbours. This does not mean sitting with our arms crossed, unable to deal with the issues the country is facing. It means proactively seeking solutions to these problems, while treating the people involved with great love.

Recently I was reading on the Clergy Coaching Network an interaction that went a little like this: 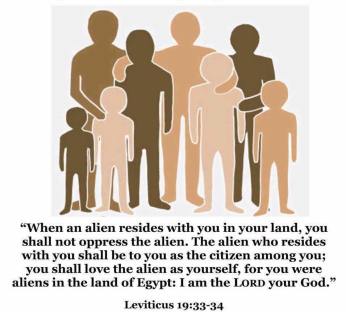 “Taking scripture out of context to prove a political point is not a Good move. There is a vast difference between a legal, law abiding alien and the protection of our borders and an alien who comes to be a part of the country they are in.“

and the responses poured back.

This one spoke to me:

“God is not a respecter of nations, but of people. God calls us all to be in community with one another and doesn’t ask for a membership card for admittance. When these words were written, it was to remind the children of Israel that they too had been marginalized and abused. It reminded them to love one another as they loved and cherished their own lives. These words call us to speak truth to power, to welcome all, to care for all. It’s not a club we join.“

This came closely on the heels of a previous post: 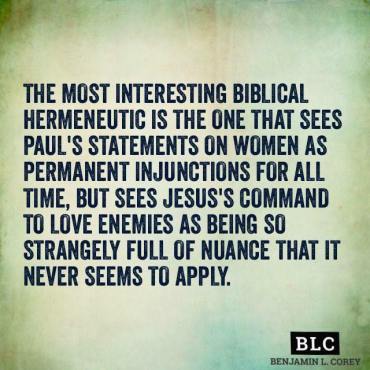 You can only imagine how many responses this had! (That’s a post for another day).

But with both of these, it seems we get so caught up in the discussions of what did this mean then and what does it mean now, that we forget that the entire message of the Bible was simple: we are each, individually, called to live as God’s light in the world today.

I remember years ago reading that the Bible is a window through which we are invited to see and speak with God.

But most of us get so caught up looking at the window, that we forget that we are meant to simply use this as an invitation to see and speak with God directly! How different each Christian would be if we would remember “this is just the window” – this is not “God himself”.  Yes, it is the word of God as given to certain men throughout Bible history, as recorded in 66 books, translated and copied from generation to generation. But it is still only the window.

The Bible was never meant to become God! Jesus saves – not the Bible.

Has modern Christianity taken this, as Jesus accused the Pharisees of doing with their 613 rules regarding proper conduct, and made it more important than our relationship with the Creator?

I’m not saying that we should throw out the Bible, but I do wonder sometimes if we wouldn’t be better Christians if we did! We would be less legalistic. We would be more inclined to listen to what the still small voice has to say.

I read this recently:

My spiritual heritage also includes hypocrites, legalists, and perfectionists. I grew up wondering why the people who did the most Bible reading, preaching, and teaching seemed to be completely unchanged at their core. What difference did memorizing, studying, and knowing the Bible really make? It didn’t seem to change the people I knew.

I can definitely relate to that!

And as I read the debates about “the alien” in our land, I am truly saddened. The Bible has over 100 verses about how to treat the alien, the sojourner, the foreigner in your land. And all of them say:

I see how the sojourners are being taken advantage of – restaurants offering to hire them for below minimum wage (knowing that they are in a precarious position and will not object), places that say “you work for tips”.  I know foreigners being told they work 7 days a week, with no rest, no compensatory days and no extra pay for the extra days labour.  And most importantly, I don’t see Christians welcoming the sojourners into their homes “he shall live with you”, maintained and supported, given food and clothing, as the Bible calls on us to do.

This crisis will only be averted when we start to tackle the problems, instead of the people.

Then we will show that we love the alien as we love ourselves.  This is practicing the presence – being love in our communities.