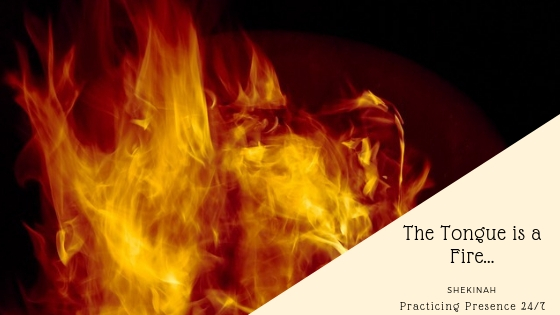 How many of us have heard the warning – play with fire and you will get burned?

This morning, our reading from the book of James reminds us that the tongue is a fire – and it can consume us.  On the one hand, fire brings warmth, safety, clean drinking water and cooked food. But on the other hand, it is also an unruly beast, bringing with it the threat of devastation and death.  Fires can roar through communities, burning down houses and leaving many homeless.  Fire can raze habitats and displace thousands of animals.  The most flammable ecosystems tend to be grasslands and shrub-lands, because the plant stems are thinner and quicker to catch light – causing all of the animals to either burrow deep into the ground, flee or fly away.  But, like I said at the beginning – fires can also be used to bring us warmth, safety, energy and cooked food.

The fire eventually ends, when it runs out of fuel or when it is put out (by firemen or by nature itself).

And James says something along these lines – when speaking about the tongue (it can be good or bad):  James 3: 9-10

With it we bless God,
and with it we curse those who are made in the likeness of God.
From the same mouth come blessing and cursing.
… this ought not to be so.

Many of you may remember, that last week I said:

Are you, as a Christian, allowing your identity – “I am a child of God” – to be a catalyst of transformation, through the continual renewing of your mind?
You can choose to align your thoughts, your words and your actions with this identity.

How do the words out of your mouth reflect that identity?  Today, I want to delve into the power of our words – how they shape our reality, our relationships & our way of thinking and being.

The first aspect of our words that I want to consider is “Keeping our Word” – the idea that “my word is my bond“.  You might remember that last week I started with a quote from Dostoyevsky:

Above all, don’t lie to yourself. The man who lies to himself and listens to his own lie comes to a point that he cannot distinguish the truth within him, or around him, and so loses all respect for himself and for others. And having no respect, he ceases to love.

Something happens inside of us when we fail to keep our word to ourselves – we start to lose faith. In ourselves.

Do you mean what you say?  Do you say you will do something and then not do it?

Vanessa and Robert are married and have been married for years.  But they have a problem within their conversations and expectations.  Robert often asks her Vanessa for  help with things. She always says yes because she experiences his request as a demand and is afraid of his reaction if she says no.
But then — afterwards — she is angry! Why does she ALWAYS have to do this?  A resistant, wounded part of her that was very controlled as a child takes over. She then fails to keep her word.
She always has an excuse: “I forgot.” “I haven’t had the time.” “I don’t know how.” “I’m afraid of not doing it right.”
Robert, over times, starts to feel frustrated, and eventually gets angry – lashing out at her verbally, which — as you can imagine — serves to create more fear and resistance.
Vanessa now feels terrible — she has lost respect for herself — and Robert thinks Vanessa just really doesn’t care for him and his needs and desires.

There’s a lot going on below the level of the words – the words are usually the symptom of something deeper.  But if we could control our tongue – it would probably mean that we are controlling all those other layers deep below.

Life lessons have taught us not to trust people who fail to keep their word.  If they let you down numerous times, you come to the conclusion that they are not reliable.  We don’t trust them to follow through on what they say they are going to do.  Friendships and deeply connected relationships thrive on trust.  And so, for this relationship between Robert & Vanessa – trust is getting broken.

On the inside of Vanessa, we see the problem as described by Dostoyevsky – she cannot love and respect herself when she does not feel worthy.  She does not value herself enough to act with integrity.  If she learns how to control her tongue – learns to say “no” when she means “no, sorry, I can’t help you with this at this time”, even though she feels it is an order and not just a request, another little fire will start to burn within her – this time a warming fire, rather than destructive.

Imagine if Vanessa loved and respected herself — if she learned to allow her identity – “I am a child of God” – to be a catalyst of transformation, through the continual renewing of her mind? One day, she would reach a moment where she understands that sometimes she needs to  say “no” because she doesn’t have time to do what Robert is requesting of her.  She does so kindly and graciously, taking a compassionate moment to explain that her word is very important and she wants to keep her word.

If Robert, on the other hand, could allow his identity – “I am a child of God” – to be a catalyst of transformation, through the continual renewing of his mind – what type of man might we find? One less demanding and controlling. One less angry and accusing.  One that could compassionately express his needs without demanding that they be met. A child of God that knew that his needs were met from above, not by a person – not expecting another person to meet his needs, because he already has his needs met.

If either of them chose to make this change — what transformation might occur within the relationship?

Can you see, for a moment, how the tongue has so much power?

If we put bits into the mouths of horses to make them obey us, we guide their whole bodies.
Or look at ships: though they are so large that it takes strong winds to drive them, yet they are guided by a very small rudder wherever the will of the pilot directs.
So also the tongue is a small member, yet it boasts of great exploits.
How great a forest is set ablaze by a small fire!

Think, for a moment, about the power of the tongue to set gossip on fire… who has ever played Chinese whispers? I tell you a story, “in confidence”, well… maybe you and two or three more people… but it’s only a couple of people I’ve told.  And then those two or three share with others…and the fire grows.  How many lives are destroyed by gossip?  How big does this fire grow?

What wisdom are we adding?  What solution to the problem are we providing?  What are we actually doing to fix this and move to a new level?

What about the fire of anger and hatred?  Have you noticed how those fires are burning at the moment?  Fires of racism? Fires of discrimination? Fires of gender inequality and discussions? Fires of religious differences?  How many examples of this can you think of right now?

Imagine if that one person, at the very beginning, had control of their tongue? What kind of fires could we have that gave us safety, gave us food, gave us energy?

Think, for a moment, of words of encouragement?  Or words of gratitude?  What has happened within your heart when someone has used their tongue to build you up? To encourage you? To give you thanks for what you are doing?

What kind of fires could you start with positive words — loving words — compassionate words?

Words are so powerful – how many of us have not heard, at some time, the words from Martin Luther King’s “I have a dream” speech?

Let us not wallow in the valley of despair, I say to you today, my friends.
And so even though we face the difficulties of today and tomorrow, I still have a dream. It is a dream deeply rooted in the American dream.
I have a dream that one day this nation will rise up and live out the true meaning of its creed: “We hold these truths to be self-evident, that all men are created equal.”

How many fires of hope did Martin Luther King ignite that day with his speech?

Or how about Winston Churchill’s speech — commonly referred to as the “We shall fight on the beaches” speech:

How many tired and scared souls were ignited that day with courage – roused to carry on fighting against all odds – because of this speech?

The tongue is a fire…

What kind of fires are you choosing to light with your tongue?